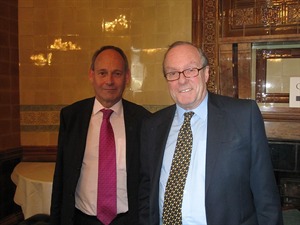 On Wednesday 20th October, Sir Tony Brenton, Britain’s Ambassador to Russia from 2004-2008, opened GSF’s 2010-2011 lecture series with an extremely knowledgeable, comprehensive and astute overview of Russian affairs. Under the title ‘Russia: A New Whiff of Optimism?’, he painted two contrasting scenarios, presenting a choice between ‘the old, lazy, resource-dependency, corrupt Russia’ which would be left behind by its fellow BRICS and would view China as an increasingly looming threat. The alternative was that Russia’s‘internal strengths, its dynamism, its consciousness of its own interests vis-à-vis China, vis-à-vis the West, vis-à-vis economic strength’ would prevail, resulting in perhaps not a democratic Russia in the next ten or twenty years, but one with a good economy ‘moving in a democratic direction’. Sir Tony erred on the optimistic side, but he invited the audience to draw its own conclusions for Russia’s likely future trajectory – the audio transcript is available by clicking on the link below: