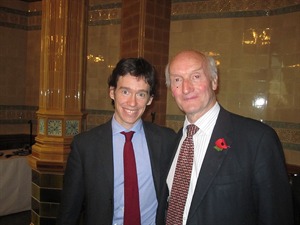 Rory Stewart MP, with Lord Anderson of Swansea, who chaired the event

On 2nd November, Rory Stewart MP was our November guest lecturer, speaking to a packed Forum on the question of ‘Afghanistan: A Winnable War?’ The event was chaired by Lord Anderson of Swansea, who described the lecture as a ’tour de force’. Having just returned from Afghanistan, Rory described his most recent impressions of the present situation. He drew on his vast experience, not just in Afghanistan but also in Iraq to give a fascinating analysis of the choices facing Britain, believing that it was time to ‘start having a conversation here in Britain about how we are going to shift towards the end of combat operations by 2015’, in order to avoid a situation in which UK forces are ‘held on the ground in an American fight’ longer than seems commensurate with our capacity. He pointed out that by 2015, Britain will have been in Afghanistan for 14 years and ‘if we have not managed to achieve what we set out to achieve in 14 years, my guess is that we are probably unlikely to ever achieve it and at some point we have to draw a line under things.’ In conclusion, he posed the question to the Forum of how to ensure that Britain ‘pragmatically, realistically, in a textured, detailed fashion’ does not repeat the fiasco of Basra, underlining that we have got four years to sort this out, ‘four years to have a grown up conversation with the United States to make sure that by the time we cease combat operations in 2015, they are ready for it and we are performing an honourable role in intelligence, in special forces operations and in training, but we need to do that now.’