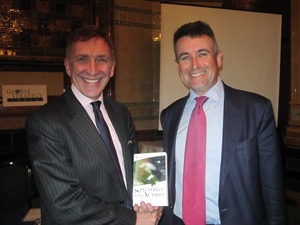 On 1st March, Steven Jermy, formerly Strategy Director at the British Embassy in Kabul and author of ‘Strategy For Action: Using Force Wisely in the 21st Century’ spoke in a GSF event entitled ‘Strategy in Afghanistan and Beyond: Delivering or Not Delivering on UK Objectives’, which was chaired by Bernard Jenkin MP, Chairman of the Public Administration Select Committee.   Steven Jermy put the case that the UK government has lost the capacity to think and act strategically, citing Afghanistan as an example.  He said that despite the over ambition of foreign policy in Afghanistan, there remained an incapacity to grasp how the military campaign could be brought to a conclusion and a lack of ability to define a political end point.  Bernard Jenkin MP said that his prognosis was a gloomy one: although the campaign in Afghanistan had worthy intentions, the price was too high given its lack of strategic importance to the UK.  He agreed that it was evidence of our lack of capacity to think strategically, as documented by the recent Public Administration Select Committee report, ‘Who does UK National Strategy?’