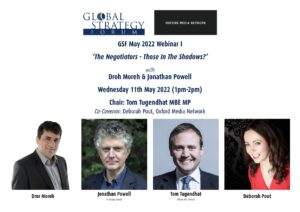 History is often made of the grand political photo opportunities capturing the moment where peace agreements are signed. But who are the negotiators behind the scenes? In some cases they are politicians, but in many instances they are not. Some might argue the negotiators are the unsung heroes of history and international diplomacy – those who partake in the shuttle diplomacy, the long, arduous hours of talks sometimes spanning years and decades in the hope of achieving that breakthrough moment of agreement between parties to a conflict. What are the prerequisites, the skills and psychology needed to be an effective negotiator?

Our event on Wednesday 11th May ‘The Negotiators – Those In The Shadows?’, co-hosted with the Oxford Media Network, gave a peek into this often overlooked world and showcase the work of negotiators in the Middle East Peace Process, Northern Ireland and other parts of the world. The event was inspired by the latest documentary by Academy Award nominated Israeli filmmaker Dror Moreh. The Human Factor is an insider account of three decades of the Middle East Peace process from the perspective of the negotiators involved.

We were delighted to welcome to GSF Dror Moreh, Jonathan Powell and Tom Tugendhat MBE MP. Dror gave his account of the thinking and process behind the documentary, and he discussed his approach to persuading Middle East Peace negotiators and those usually reluctant to seek the media limelight to talk on camera. Jonathan Powell provided an insight into the role of a negotiator as former chief of staff to Prime Minister Tony Blair and UK chief negotiator in the Northern Ireland Peace Process as well as sharing other relevant experiences – as Prime Minister David Cameron’s Special Envoy on Libya and in his current role as CEO of Inter Mediate.  The event was chaired by Tom Tugendhat MBE MP, Chair of the Foreign Affairs Committee, with Deborah Pout, Founder of the Oxford Media Network, as our Co-Convenor.

To watch the event again, including the trailer for The Human Factor, please click here. 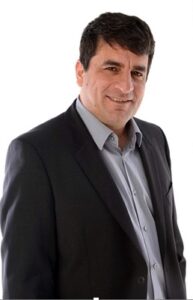 DROR MOREH began his career as a cinematographer, became one of Israel’s leading directors of photography, and quickly emerged as an award-winning feature film and documentary director of international renown. His directorial debut, Sharon, is a feature-length documentary looking at the work of Israel’s controversial former Prime Minister, Ariel Sharon, and his impact on the Gaza Disengagement Plan. The film was selected for the official Panorama program at the 58th Berlin Film Festival. Moreh achieved international recognition with his second documentary feature, The Gatekeepers, which was nominated for the Best Documentary at the 85th Academy Awards in 2013. The Gatekeepers revolves around intimate discussions with six former heads of the Shin Bet, Israel’s internal security service. For the first time ever, they agreed to share their insights and reflect publicly on their actions and decisions. In these revealing interviews, they shed light on the controversy surrounding the Occupation in the aftermath of the Six Day War.  The Human Factor film and mini-series focuses on the crucial actors in the comprehensive Arab-Israeli Peace Agreements and their not-so-obvious agendas, and paints a dramatic portrait of those attempting to build a new, post-Cold-War order in the Middle East.  Moreh also directed Occupational Hazard, a documentary film portraying an Israeli journalist on a journey to Iraq during the second Gulf War.  He is currently working on several feature length documentaries and series, scheduled for release in 2022-2023. Corridors of Power exams how American leaders have responded to genocide and acts of mass atrocities in the post-Cold War era. Dagan tackles the legacy of Israel’s top spymaster and former head of the Mossad intelligence agency, Meir Dagan. In 2007 Moreh founded a production company, Dror Moreh Productions, that specialises in international co-productions, with a mandate to make theatrical and television documentary and feature films. Based in Tel Aviv, DMP focuses on regional and international geopolitical subjects that resonate with audiences around the world. 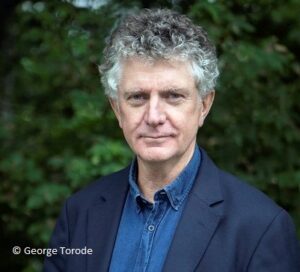 JONATHAN POWELL is CEO of Inter Mediate, the charity he founded in 2011 to work on conflict resolution around the world. Jonathan worked on the negotiations with ETA in the Basque country, on the negotiations in Colombia with the FARC and on the peace negotiations in Mozambique. Jonathan was David Cameron’s special envoy for Libya from 2014-2016. Inter Mediate is working on ten conflicts around the world at the moment. Jonathan was Chief of Staff to Tony Blair from 1995 to 2007, and from 1997 to 2007 was also Chief British Negotiator on Northern Ireland.  From 1978-1979 he was a broadcast journalist with the BBC and Granada TV and from 1979 to 1994 a British Diplomat. He is the author of Great Hatred, Little Room: Making Peace in Northern Ireland (2008), The New Machiavelli, How to Wield Power in the Modern World (2010) and Talking to Terrorists, How to End Armed Conflict (2014). TOM TUGENDHAT MBE MP was elected as the Conservative Member of Parliament for Tonbridge and Malling in 2015 and was re-elected in 2017 following a career in the British Army.  In 2017, he was elected the youngest ever Chair of the Foreign Affairs Select Committee in the House of Commons. As a Reservist, Tom served on operations in Iraq and Afghanistan and as the military assistant to the Chief of the Defence Staff. He also served in the UK Foreign Office, assisting in the establishment of the National Security Council of Afghanistan and government in Helmand Province. A fluent Arabic speaker, Tom read Theology at Bristol University and studied Islamics at Cambridge University for a Master’s. After graduating, Tugendhat was a journalist based in Beirut, writing on conflict, regional politics and economics. He has served on several parliamentary committees including the Public Administration and Constitutional Affairs Committees and is a regular commentator in international media. 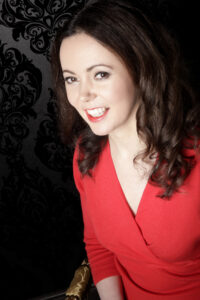 DEBORAH POUT (Co-Covenor) is a freelance analyst and communications expert/consultant. She founded the Oxford Media Network. She helps organise the International Media Awards on the Middle East for the International Communications Forum.  She started her career as a researcher on Espresso, a consumer affairs programme at Channel 5.  She was a cover producer for David Chater, the Middle East Correspondent for Sky News in Jerusalem. Deborah then was a freelance journalist and producer in Jerusalem for Sky News Australia and Singapore’s Channel News Asia.  She was a Reuters Fellow at the University of Oxford and conducted research on the Israeli/Palestinian conflict interviewing many of the key players on the ground.