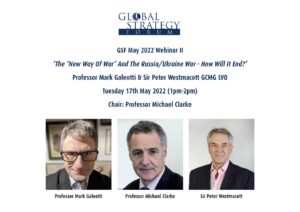 Ten weeks into Russia’s brutal invasion of Ukraine, the war has entered a new phase. After failing to take Kyiv, Vladimir Putin has moved his offensive to the longstanding battle for control of the Donbas region. With the east of the country now bearing the brunt of Russian attacks, reports of atrocities and war crimes already committed continue to emerge as the full extent of the devastation wrought on Ukrainian lives and livelihoods becomes apparent.

In GSF’s March event, we asked what Vladimir Putin’s endgame was. Any gamble on a speedy victory clearly has not paid off, but the fighting in the Donbas has been ongoing since 2014. So how and when will this unfolding war end? The UK Foreign Secretary, Liz Truss, said recently that the ‘fate of Ukraine hangs in the balance’ and warned of the need to be ‘prepared for the long haul’ – a war that could last for months or years – in words echoed by NATO Secretary General Jens Stoltenberg.

If Ukraine cannot drive Russian forces out, what happens next? Professor Mark Galeotti, author of The Weaponisation Of Everything: A Field Guide To The New Way Of War, has outlined three possible scenarios: peace, partition or stalemate. Which is the most likely? In the face of Russian aggression, have the US, the EU, the UK and NATO taken the right approach in the form of sanctions and military support for Ukraine, and what should they be doing now? As the war drags on, will the unprecedented western unity shown to date hold firm or will cracks begin to appear? How important is the role of diplomacy in the fight for Ukraine’s survival? And what of inside Russia – could this mark the end of Putinism? How far does this war provide a template for the future of conflict and the new ways of waging war, from hybrid war, grey zone warfare, to unrestricted war? And how high is our current geopolitical risk?

To discuss these questions, we were delighted to welcome a highly expert and distinguished panel back to GSF:

Professor Mark Galeotti, Author of The Weaponisation Of Everything: A Field Guide To The New Way Of War (2022); Director, Mayak Intelligence.

They spoke in a GSF discussion entitled ‘The ‘New Way Of War’ And The Russia/Ukraine War – How Will It End?’ which was chaired by Professor Michael Clarke, Director-General of RUSI (2007-2015); co-author of Britain’s Persuaders (2021); and GSF Advisory Board member.