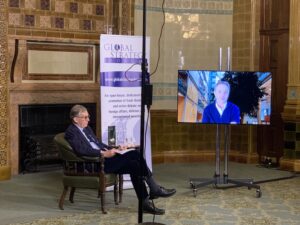 On Tuesday 14th December, we were delighted to welcome back to GSF, Sir Jeremy Farrar, Director of the Wellcome Trust and co-author of Spike: The Virus Vs The People – The Inside Story. 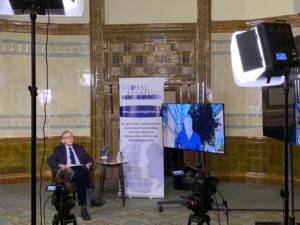 In conversation with Sir David Omand GCB, Visiting Professor in the War Studies Department, King’s College London, and former UK Security & Intelligence Coordinator, Permanent Secretary of the Home Office and Director of GCHQ, Jeremy discussed his book, Spike: The Virus Vs The People – The Inside Story, and what led him to write it, the story of the pandemic to date, the importance of ‘radical transparency’ to build public trust, the lessons from 2020 on needing to improve how scientific advice feeds into the broader policy context, the threat currently posed by the Omicron variant, how to avoid lockdowns – ‘the failure of public health and public policy-making’ – through early action, the urgency of global vaccine equity and much more. 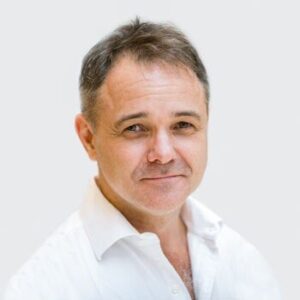 Jeremy Farrar is Director of the Wellcome Trust – the world’s second largest independent charitable foundation that exists to improve human health through research.  Jeremy is a clinician scientist who before joining Wellcome in 2013 was, for eighteen years, Director of the Clinical Research Unit at the Hospital for Tropical Diseases in Viet Nam, where his research interests were in global health with a focus on emerging infectious diseases. He was named 12th in the Fortune list of 50 World’s Greatest Leaders in 2015 and was awarded the Memorial Medal and Ho Chi Minh City Medal from the Government of Viet Nam. In 2018 he was recognised as the President Jimmy and Rosalynn Carter Humanitarian of the Year. Jeremy was knighted in the Queen’s 2019 New Year Honours for services to global health and awarded the Order of the Rising Sun, Gold Rays with Neck Ribbon by the Government of Japan in recognition of contribution to global health. He is a Fellow of the Academy of Medical Sciences UK, European Molecular Biology Organisation (EMBO), the National Academies USA and a Fellow of The Royal Society. His book with Anjana Ahuja, ‘Spike: The Virus Vs The People’ was published by Profile Books in July 2021. 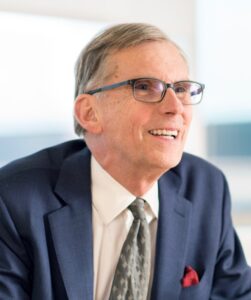 Sir David Omand GCB is a Visiting Professor in the War Studies Department, King’s College London and at the Norwegian Defence University where he teaches intelligence studies. He has been a Vice-President of RUSI and is now a Distinguished Fellow. His posts in government service included UK Security and Intelligence Coordinator, Permanent Secretary of the Home Office and  Director of GCHQ, the UK’s signals intelligence and cyber-security organisation. In the Ministry of Defence he served as Deputy Under Secretary of State for Policy and as Principal Private Secretary to the Secretary of State. He was the Senior Independent Director of Babcock International Group plc until 2021 and is on the senior advisory board of Paladin Capital Group investing in the cybersecurity sector. He is the author of Securing the State (Hurst 2010) and Principled Spying: The Ethics Of Secret Intelligence (OUP 2018). His latest book, How Spies Think: 10 Lessons In Intelligence, is now published as a Penguin paperback.