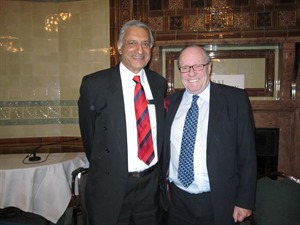 In his lecture to GSF on Tuesday 29th November, entitled ‘The Commonwealth: Convening and Connecting To Add Global Value’, the Secretary-General gave a very clear exposition of where the Commonwealth is going and how he believes that it will get there.

Following what he called a ‘make or break’ CHOGM in Perth in October, Mr. Sharma outlined the many successes of the Commonwealth and its work.  He spoke of the Commonwealth ‘moving up the global scale’ and said the organisation was presently at a ‘transition point’ and at a ‘point of flex’ in a world in flux.  He concluded by saying that the world finds itself ‘balanced between peril and promise and [the Commonwealth] is one organisation which only goes to realising the promise.’