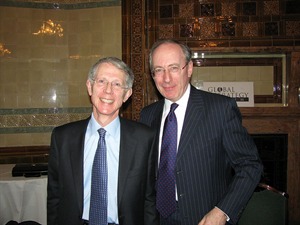 On the day of Barack Obama’s inauguration, Tuesday 20th January 2009, Sir David Manning GCMG, CVO, Britain’s Ambassador to the United States from 2003-2007, gave an incisive and wide-ranging lecture on the challenges ahead for the US, both in terms of foreign policy and domestic issues. The event was chaired by GSF Board Member Sir Malcolm Rifkind QC MP.