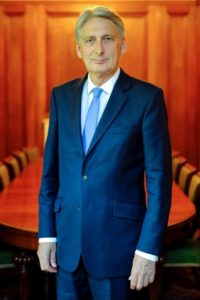 We are delighted that the Rt Hon Philip Hammond has agreed to join GSF’s Advisory Board.

Making the announcement, Lord Lothian, GSF’s Chairman, said ‘I am delighted that Philip has agreed to become a member of GSF’s Advisory Board. He has had an extraordinarily distinguished career in politics at the highest level, as Defence Secretary, Foreign Secretary and most recently Chancellor, and I am very pleased that he will now be bringing his experience and insights to GSF’.

Philip Hammond has been a UK Cabinet Minister and key member of the British Government for almost a decade.  Leading four departments over nine years, and rising to the second most powerful job in government, he is one of only three people to serve continuously in the UK cabinet from 2010 to 2019, serving under Prime Ministers David Cameron and Theresa May.  Taking on the role of Chancellor of the Exchequer shortly after the 2016 Brexit Referendum, Hammond took charge of the UK economy at a time of unprecedented uncertainty. Philip Hammond has always believed that nobody voted for Brexit with a view to becoming poorer or less secure, and thus that the best way of delivering the result of the referendum is to negotiate a deal with the European Union that allows a continued close economic partnership, even after the UK leaves the EU. He fought strongly for this approach within the cabinet and has continued to do so since leaving government.  He also focused on the needs of business and particularly the need to protect London’s global financial markets. Hammond has been especially focused on the challenges faced by developed economies, specifically: the technological revolution and how it is already transforming the way we work and live our lives; climate change and how to harness the market economy to deliver decarbonisation; demographic shifts and the challenges of an ageing population, and particularly in the UK, the challenge of raising productivity. Through his roles as Chancellor and as Foreign Secretary, Philip Hammond has considerable experience of working with China, and clear views about how to manage the integration of China as a major economic and strategic power into the global system. He also has strong connections in the Gulf region. He was part of the “E3+3” team that negotiated the JCPOA nuclear arms control deal with Iran in 2015. During his tenure as Defence and then Foreign Secretary, Hammond built strong links with the US and other allied counterparts, both civilian and military, and was a frequent visitor to Afghanistan during the campaign. Hammond’s experience as Chancellor and as Foreign and Defence Secretary give him a strong grasp of the strategic issues facing the Western Alliance, as well as the economic and scientific and technological challenges.  Philip Hammond grew up in Essex, and studied Philosophy, Politics and Economics at University College, Oxford. Before entering Parliament in 1997, he had a wide-ranging business career across a number of sectors including healthcare, oil and gas and property, in the UK and in Europe.  He stepped down as the Member of Parliament for Runnymede and Weybridge in November 2019 after 22 years serving the Surrey constituency.