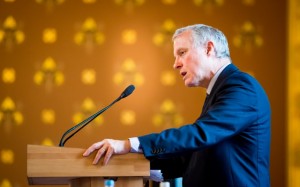 We are delighted to announce that Sir Iain Lobban has joined GSF’s Advisory Board.

Making the announcement, Lord Lothian, GSF’s Chairman, said ‘We are honoured and delighted that Iain has agreed to become a member of GSF’s Advisory Board. I know that GSF will benefit enormously from Iain’s vast wealth of experience, gained during his highly distinguished career and I much look forward to working with him.’

Sir Iain Lobban was the Director of the British security and intelligence agency, Government Communications Headquarters, from 2008 to 2014, having previously served as its Director General for Operations.

He pioneered an integrated service of intelligence and security in domains as varied as cyber defence; counter terrorism; military campaigns overseas; and the prevention and detection of serious crime. Cyber Security, both nationally and internationally, has been at the heart of his role in recent years: he set new direction for innovative government partnering with the private sector and with academia.

As the GCHQ Director he attended the UK’s National Security Council on a weekly basis from its very first meeting in May 2010 and was a Principal member of the Joint Intelligence Committee for over 6 years.

Sir Iain is now engaged in three fields: the advocacy and demystification of Cyber Security, providing strategic advice and personal perspective, nationally and internationally, to governments and businesses; sharing lessons and insights on strategic and institutional leadership; and entrepreneurship, in the broadest sense of the word.