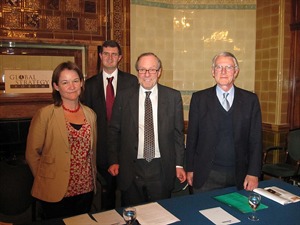 On Tuesday 23rd March, National Liberal Club, GSF hosted a discussion entitled ‘Yemen and Somalia: A ‘Ticking Time Bomb’?’ with panellists Victoria Clark (author of ‘Yemen: Dancing on the Heads of Snakes’); Stephen Day, former Head of the Middle East Department, Ambassador to Qatar and Tunisia and Dr Kristian Coates Ulrichsen, Research Fellow at LSE Global Governance and Deputy Director of the Kuwait Research Programme on Development, Governance and Globalisation in the Gulf States. The debate was designed to address a number of questions including the scale of the security threat posed by both countries. Yemen, heralded by some as the next front in the War on Terror, was addressed in particular. The measures, including development measures, which the international community should consider to support both countries were discussed as well as how these efforts might produce real results. It was agreed that while there was clearly a terrorist flow of information and weapons between Yemen and Somalia, there were significant differences between the two countries, which ought to inform policies towards them. It was also suggested that framing international policy towards Yemen based solely on the potential terrorist threat could risk undermining efforts to stabilise the country and that the focus on maintaining a united Yemen might be misguided.