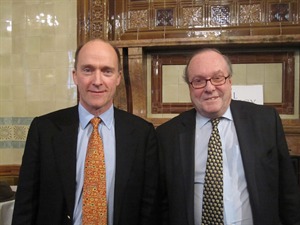 He gave a fascinating and detailed analysis of Whitehall’s strategic weakness  – the ‘structural, methodological and training shortfalls in the Whitehall system which Cameron has inherited from Blair’ – and the effect that this had had on past overseas operations and would continue to have on those in the future.  Not only did Whitehall not ‘do’ strategy, he said, but Whitehall couldn’t even ‘agree what strategy is’.

He  explained why, in his view, the absence of strategy had undermined our operations in Iraq and Afghanistan and why it ‘risks dooming our ventures in North Africa even as they are just beginning.’

He warned of the dangers of confusing policy with strategy and explained how the operations in Afghanistan and Iraq would have better better served by a Comprehensive Plan in place of a Comprehensive Approach.

He concluded that ‘patience was running thin with the executive inadequacies in Whitehall’ and there that was a consensus building that Whitehall ‘could do better’.  The challenge, as he saw it, was to get Whitehall to improve its cross-departmental capability to conceive and execute strategy and to create an effective and functional cross-Whitehall doctrine and executive methodology: ‘More ambitiously, the central department should be re-empowered to direct finance and cohere activity to provide that missiing operation level of command between policy and execution…..a rationalisation of departments on leaner functional lines would lead to better-integrated government action and a reduced bill in line with current austerity measures. For all this to happen, it will take a concerted effort by us all to light that bonfire which so many observers of Whitehall have built under current structures and practices.’

To read Richard Norton-Taylor and Nick Hopkins’ blog in the Guardian following the event, please click or cut and paste this link: http://www.guardian.co.uk/politics/defence-and-security-blog/2013/mar/06/defence-security-strategy