Mark Sedwill CMG, the UK’s Special Representative on Afghanistan and Pakistan, opened GSF’s 2010-2011 lecture series with a lecture entitled ‘Afghanistan: Are British Objectives and the Timetable for 2014 still Intact?’ on Tuesday 11th October. 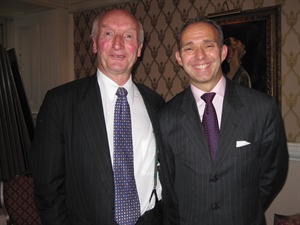 In an event chaired by the Rt Hon Jack Straw MP and Lord Anderson of Swansea, Mark Sedwill confirmed that British combat troops would withdraw from the country in 2014, but that Britain would remain involved in a training role for the Afghan security forces.  He acknowledged past mistakes in coalition strategy, particularly with regard to the Pashtun south, and said while military progress in Afghanistan was real, the politics were extremely difficult and that confidence in the region was very fragile.   The challenge, he said, was to try to restore and maintain confidence that military progress would be reflected in political progress too.  He highlighted three strands in British strategy.  Firstly, the need to build a viable state; secondly, one that was resilient enough to withstand the security threats which would remain post 2012; and thirdly, the pursuit of a political process based on regional reconciliation and reintegration.  He said that talks with the Taliban were at a very delicate stage and he warned that a political settlement might not be complete by 2014.

Click here to listen to The October Lecture I

Click the link to read Richard Norton-Taylor’s article in the Guardian: http://www.guardian.co.uk/world/2011/oct/11/envoy-critique-afghanistan-campaign?newsfeed=true