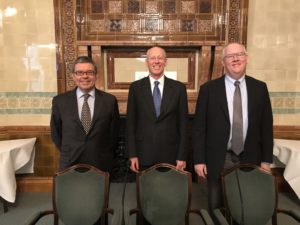 On Tuesday 12th March, we welcomed Alan Charlton CMG CVO, British Ambassador to Brazil (2008-2013) and Professor Timothy Power, Professor of Latin American Politics at the Department of Politics and International Relations, University of Oxford and Head of School at the Oxford School of Global and Area Studies, to GSF. They spoke in a discussion entitled ‘Bolsonaro’s Brazil – Break With Failed Governance Or Dangerous Lurch To The Right?’, which was guest chaired by John Everard.