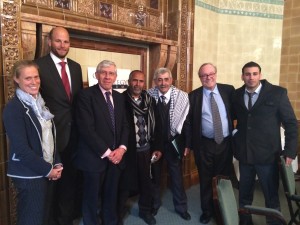 On Tuesday 18th March, Global Strategy Forum was pleased to host an UNRWA-supported delegation of three Palestine Refugee representatives from the West Bank on an advocacy mission to the UK, and to have the opportunity to hear from the refugees themselves.

As was pointed out in the event, a great deal is said and written about the Middle East, but it is still far from common to hear directly from those whose daily lives are affected by the continuing Israeli-Palestinian conflict. The three representatives, Mohammed al Korshan, Bedouin resident of Area C (E1), Nabil al-Kurd, resident of Sheikh Jarrah in East Jerusalem, and Mohammed Abu Srour, resident from Aida Camp, spoke eloquently and movingly of their desire to seek the international community’s help in making their voices heard and of safeguarding their rights in a discussion entitled ‘Refugee Voices From The Occupied Palestinian Territory (oPt): A Forgotten Perspective?’ which was chaired by the Rt Hon Jack Straw MP, Foreign Secretary (2001-2006) and GSF Advisory Board member.