We were delighted to welcome Stephen back to GSF to discuss the arguments contained in his new book, ‘When The Money Runs Out: The End Of Western Affluence’ and to hear his assessment of where the West stands today. 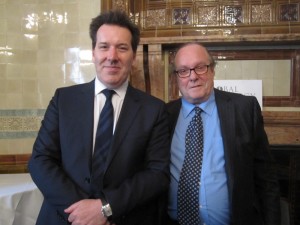 The Western world has experienced extraordinary economic progress throughout the last six decades, a period of prosperity so extended that continuous economic growth has come to seem normal.  But such an era of constantly rising living standards is an historical anomaly, Stephen King warns, and the current stagnation of Western economies threatens to reach crisis proportions in the not-so-distant future.

Praised for the ‘dose of realism’ he provided in his first book, ‘Losing Control; The Emerging Threats To Western Prosperity’, King argues in his new book that the West is not just facing the end of an age of affluence – we have made promises to ourselves that are only achievable through ongoing economic expansion. The future benefits we expect – pensions, healthcare and social security, for example – may be larger than tomorrow’s resources. And if we reach that point, which promises will be broken and who will lose out?

Drawing on historical parallels from the French Revolution to the disastrous 1931 austerity budget to demonstrate the links between economic stagnation and political and social upheaval, King will use his lecture to ask whether the West has the courage to take the painful but necessary steps towards a fairer and more stable economic future.

Stephen King is HSBC’s Group Chief Economist and the Bank’s Global Head of Economics and Asset Allocation research.  He is directly responsible for HSBC’s global economic coverage and co-ordinates the research of HSBC economists all over the world.  He is currently the top-rated global economist in the annual Extel survey. He is a member of the UK Government’s Asia Task Force.  He has given written and oral evidence on the economic effects of globalisation and on monetary policy to the House of Commons Treasury Committee and the House of Lords Economic Affairs Committee.  Between 2007 and 2009, he was a member of the European Central Bank Shadow Council.  Stephen has written on a wide variety of economic topics: recent examples include ‘The Southern Silk Road’, a study of new ‘south-south’ economic connections and ‘How to solve the eurozone’s problems’. In 2012, Stephen became a member of the Financial Times “A List”.  He also writes regularly for the main comment pages in The Times and previously wrote a weekly column for the Independent. Stephen frequently appears on both television and radio. His career began at HM Treasury, where he was an economic adviser within the civil service.  Stephen studied at New College, Oxford.  Stephen’s first book, Losing Control, was published by Yale University Press in 2010.  Widely praised, the book examines the impact of the emerging nations on western economic prosperity.  His next book, When the Money Runs Out, was published in May 2013, and in the words of Nouriel Roubini, ‘King’s hard-hitting analysis brilliantly exposes the West’s failings’.

As usual a substantial buffet lunch and refreshments will be provided. NB. The doors will open at 12.30 for lunch and the lecture will begin at 1pm.

Attendance: By invitation to GSF guests and registered members.