Sir Sherard Cowper-Coles, KCMG, LVO, former Ambassador to Afghanistan (2007-2009) and the Foreign Secretary’s Special Representative for Afghanistan and Pakistan (2009-2010), spoke on the future for Afghanistan in a fascinating lecture at the National Liberal Club on Tuesday 21st June 2011. 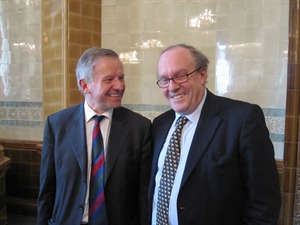 In his lecture, Sir Sherard Cowper-Coles spoke of the need for Britain and in particular, for the US to engage in a collective and sustained process to broker an internal political settlement in Afghanistan and for the involvement of regional powers in securing that settlement.  He spoke of the importance of trust and sincerity in that process and he said that Hillary Clinton was not currently doing what a Secretary of State should do to bring this about – in the Q&A session, he further stressed the imperative of getting the key parties around the negotiating table and keeping them there until agreement is reached and his belief that the US was the only power who could do this effectively.  He ended by encouraging a renewed US commitment: ‘We have got three years of hard work ahead of us in Afghanistan and all of us with influence in Washington must encourage the American politicians and the American diplomats to do the right thing.  The military have done their very best: they have suffered enormously and they have made great sacrifices. We do them the greatest honour  we can by harvesting that success politically in the years that remain to us.’  His further thoughts and reflections can be read in his new book, ‘Cables from Kabul: The Inside Story of the West’s Afghanistan Campaign.’

To listen again to the lecture, please click here.