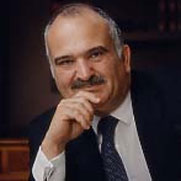 We are delighted to publish the 33rd in our series of expert comment and analysis by GSF Advisory Board member, His Royal Highness Prince El Hassan bin Talal, who served as Crown Prince of Jordan from 1965-1999 alongside his brother, the late King Hussein of Jordan. As always, the views expressed are those of the author and not of GSF unless otherwise stated. The full version of His Royal Highness’ article is now available to download: Reinforcing Connections: Interaction,  Co-operation And Resilience

This article was written for The Friday Times on 11th September 2020. The original can be found here.