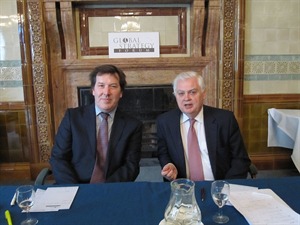 Stephen King, global chief economist at HSBC, spoke on the themes of his new book, ‘Losing Control – The Emerging Threats to Western Prosperity’ in an event chaired by GSF Advisory Board Member, the Rt Hon Lord Lamont of Lerwick (Chancellor of the Exchequer 1990-1993) on Tuesday 14th June 2010. Stephen King concluded that in an age of globalisation, there are two options for the west – either to ‘grow old gracefully’ and accept that the baton of economic growth has been passed to other parts of the world. Or, to try and disengage from globalisation. Yet while this desire might be understandable, he argues that the ‘really big losers’ from western disengagement would be the west itself, given that the extent to which the west has become dependent on the ongoing success of the emerging world ‘strongly suggests that ultimately it is engagement rather than disengagement that will matter for the years ahead, no matter the fact that the west will be struggling to cope with all of the domestic implications of globalisation over the next few decades.’