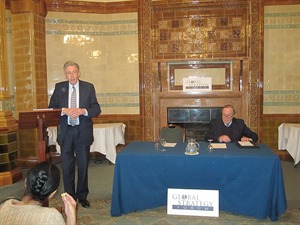 At GSF’s Christmas drinks on Monday 6th December, Lord Lothian gave a lecture based on his recently published pamphlet, ‘Farewell To Drift: A New Foreign Policy For A Network World’, which argues the case for a coherent foreign policy which serves Britain’s national interests in a world where power and influence is increasingly wielded through networks rather than blocs and where‘team leadership is giving way to team cooperation’. He said that many of his ideas were drawn from Lord Howell of Guildford and his lecture at GSF last October, entitled ‘Adamant for Drift’ (https://www.globalstrategyforum.org/upload/upload83.pdf).

Lord Howell , Minister of State at the Foreign and Commonwealth Office, introduced the event and gave a vote of thanks, in which he said that presentation had been ‘full of new ideas with a brilliant emphasis on the network nature of our connections’. He went on to say that beyond the UK’s relationships with the USA and with Europe, there was the question of ‘the wider world in which power has accumulated and the fantastic opportunities which we have because of history, both through bilateral links and multilateral links through the Commonwealth system’. He described the new world as ‘dangerous and competitive’ but said that the FCO was in ‘an excellent position to cope with the new landscape which [Lord Lothian] has so vividly noticed and recorded and to play our part in the new patterns that are emerging’ and that Lord Lothian’s ideas were ‘filtering through the great policy-making and opinion forming establishments’. While not everyone would agree with everything in ‘Farewell to Drift’, he felt that it would ‘certainly promote, activate and open minds’ and that was what mattered – ‘to be open-minded and aware of what is going on’. He concluded by saying that Lord Lothian was ‘aware of what was happening – and we need to be aware.’ T