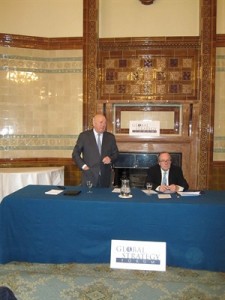 On Monday 16th November, Global Strategy Forum was honoured to welcome F W de Klerk, former President of the Republic of South Africa and Nobel Laureate. In the month which marks the twentieth anniversary of the fall of the Berlin Wall, Mr De Klerk reflected on this momentous period in world affairs. His insights illuminated the ramifications of this event on a global scale and took the story of the Fall of the Berlin Wall well beyond its usual European context. He concluded that in South Africa ‘the fall of the Berlin Wall showed how deeply we are influenced by events on the global stage – and helped us to break down the walls between our own people.’