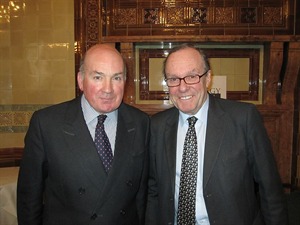 General Sir Richard Dannatt gave our second February lecture on Tuesday 23rd February, speaking on the theme of the Challenges for Defence in the Next Decade. Referring to the fact that much had changed in the world since the last Strategic Defence Review in 1998, he said that we were now at a strategic crossroads, which required an extensive review of our place in the world. He said that the debate which the SDR framed should be policy-led and not financially-driven, but that careful calibration would be required to maintain a broad range of capabilities to the extent that is affordable. He advocated a move to a quadrennial or quinquennial system of Strategic Defence Reviews, which would provide a stable framework within which these fundamental issues could be addressed. In reference to Operation Moshtarak and the future for Afghanistan, he said that ‘tomorrow would be a very uncertain place if we do not succeed [in Afghanistan] today’ but he pointed to the need to place the operation in Afghanistan on a proper warlike footing. He concluded by paying tribute to the outstanding commitment and capability of the young men and women of the armed forces and said that the ‘challenge for policymakers over the next few months [was] to ensure that those same people can go on making the same kind of commitment in the best interests of the nation in the next decade and beyond.’