Global Strategy Forum and the Geneva Initiative co-hosted a seminar on the Middle East Peace Process, attended by a delegation of Israelis and Palestinians. The seminar in the House of Lords was opened by Foreign Office Minister Alistair Burt MP. 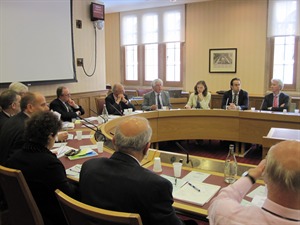 On 23rd May 2011, Global Strategy Forum in co-operation with the Geneva Initiative held a seminar entitled “Looking to September: What Role Can The International Community Play In The Middle East Peace Process?” in Committee Room 4A of the House of Lords. The Chairman was Lord Lothian, Chairman of GSF.

The seminar was followed by a lunch for speakers and guests.  The Rt Hon James Arbuthnot MP was our guest of honour and his speech was followed by a reply from the Palestinian Ambassador, HE Professor Manuel S Hassassian.

The Seminar Programme can be downloaded here.