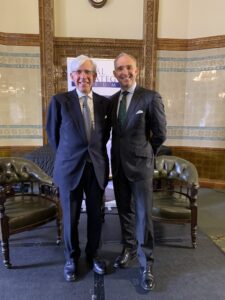 He spent an hour in conversation with former Foreign Secretary and GSF Advisory Board member, the Rt Hon Jack Straw over lunchtime at the National Liberal Club,and together they brought their unparalleled expertise to discuss the question of ‘2022: War In Europe, World In Crisis – The Year Geopolitics Changed?’ 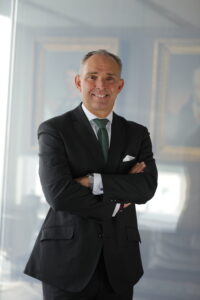 MARK SEDWILL, Baron Sedwill of Sherborne KCMG FRGS FIoD is Chairman of the Atlantic Futures Forum and a cross-bench member of the House of Lords. He recently chaired a G7 Panel on Global Economic Resilience. He is a non-executive director of Rothschild & Co and of Lloyd’s of London. Lord Sedwill was Cabinet Secretary & Head of the Civil Service (2018-2020), National Security Adviser (2017-2020), Permanent Secretary at the Home Office (2013-2017), and British Ambassador and NATO Representative in Afghanistan (2009-2011). Before that he had a diplomatic and security career serving in Egypt, Syria, Jordan, Cyprus and Pakistan.  Educated at St Andrews and Oxford Universities, Lord Sedwill is a Fellow of the Royal Geographical Society and of the Institute of Directors, an Honorary Fellow of Oxford University and of St Edmund Hall, Oxford, and a Distinguished Fellow of RUSI. He is President of the Special Forces Club, a member of the IISS Advisory Council, the RNLI Council and the HALO Trust board, an Honorary Colonel in the Royal Marines and an Honorary Bencher of Middle Temple. He is also the recipient of several awards and honours for national and international public service. 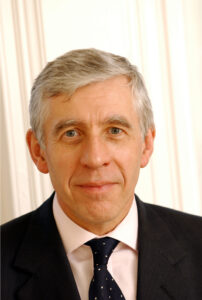 THE RT HON JACK STRAW (Chair) was the Member of Parliament for Blackburn from 1979 to 2015. From 2007 to 2010, he was the Lord High Chancellor of Great Britain and the Secretary of State for Justice. He has served as Home Secretary (1997-2001), Foreign Secretary (2001-2006) and Lord Privy Seal and Leader of the House of Commons (2006-2007). Following the election in May 2010, he became the Shadow Lord Chancellor and Shadow Secretary of State for Justice, but announced his intention to step down from the front bench after the Labour Party Conference of that year. His autobiography, Last Man Standing: Memoirs Of A Political Survivor, was published in September 2012. He retired as MP for Blackburn at the May 2015 general election. He continues to play a leading role in national politics, on home and foreign policy. He is co-Chairman of the British Turkish Forum; takes a close interest in Iran, and Chairman (from April 2022) of the British Iranian Chamber of Commerce; was a member of the Independent Commission on the Freedom of Information Act;  Chairman of the Blackburn Youth Zone, and a Trustee of Star Academies Trust. His most recent book, The English Job: Understanding Iran And Why It Distrusts Britain, was published in July 2019.