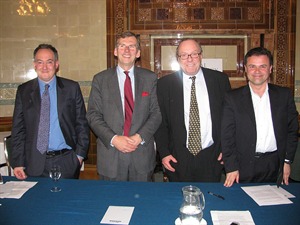 Oliver Kamm, leader writer and columnist for the Times, Sir David Omand GCB, Visiting Professor, Department of War Studies, King’s College, London and former UK Security and Intelligence Coordinator; and Gideon Rachman of the FT, joined GSF on 19th May to debate whether the world economic crisis was our biggest security threat. The panel had different perspectives on the extent of the security threat posed, but there was general agreement that the economic crisis at the very least had indirect implications for security. The audio transcript of the debate is available by clicking below.